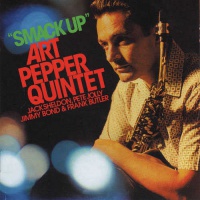 This release presents Art Pepper’s complete original album Smack Up (Contemporary S7602). Recorded in a quintet format with trumpeter Jack Sheldon. Smack Up marks Pepper’s second to last album as a leader before entering prison to serve the longest of his drug-related sentences (after a short session as a sidemen in January 1961 he entered San Quentin and wouldn’t record again until May 1964, or lead a studio date until 1973). As a bonus, the only tune from the soundtrack of the film The Subterraneans by a quintet co-led by Pepper and Sheldon, as well as a complete 1959 nonet session, featuring both musicians in the esteemed company of Chet Baker, Harold Land and Mel Lewis, among others.