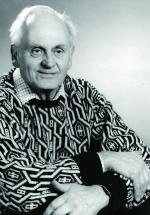 Stephen Dodgson was born in London in 1924 and lived there with few interruptions all his life. He was educated at Stowe and served in the Royal Navy during World War II. He received his musical training at the Royal College of Music, and was subsequently for many years a member of its teaching staff in theory and composition. He started working at the College in the Junior Department where he also conducted the orchestra, for which he wrote several pieces. In 1950 he was in Italy with a travelling scholarship.

From 1957 he was often employed by the BBC; as provider of incidental music for many major drama productions, as well as a frequent and familiar broadcaster of reviews and other musical topics.

His compositions cover almost every genre, including opera (Margaret Catchpole, 1979), seven piano sonatas, nine string quartets and much other chamber music.There is also a substantial body of music for symphony orchestra & many concertos with chamber orchestra. His large output of vocal music ranges from a Magnificat & a Te Deum for chorus, soloists & orchestra through music for unaccompanied choir to songs for one or two singers with instrumental accompaniment. For many years Chairman of The National Youth Wind Orchestra he has written music for this and other wind orchestras. For the Philip Jones Brass Ensemble he wrote and arranged music for various combinations of brass instruments. He is, however, probably best known worldwide for his numerous works for guitar. His interest in this instrument was prompted by Julian Bream.

Much of this music had now been recorded, including six orchestral Essays, all the String Quartets, a String Sextet, Quintets for Clarinet, Flute & Guitar, Oboe Quartet, all the Piano Sonatas, Bagatelles & Piano Trios, other chamber & vocal music & most of the guitar music.

These are additions to Stephen’s libretto which is just the spoken parts but gives enough idea of the story. The choruses & arias are lovely. Zarna the fortune teller has one about her powers, Molly & Alec have a sad little duet, Alec has a charming one with the chorus about his day on the hills, Dr. Garbo has a bragging one, Peter has one explaining how he has earned £500 being Dr. Garbo’s stooge.

The opera takes place in Ballycastle, which is compared favourably to other towns in Ireland, on Lammas Fair Day.

No. 7 Finale is just music and this is how it all ends.

Come all merrily join now Peter’s having a party for his happy returning with the money he has been earning. Wish him happiness now. We forgive the deceit that has been practised on us today. For life is too short to bear false grudges on Lammas Day.

Molly. For a year we’ve been fated to live apart all alone. We’ve been trying to play our part.

Peter. Now I’ve come back to my family to make a fresh start.

Sheila. In his most expensive medicine.

Sean. Nor must we forget the Gypsy

Moira. She’s so grand at prophesying

Zarna. All for only six pennies I told everything rightly.

Garbo. I run such a good business you can’t treat it so lightly.

Chorus. And with this blessing too we bid good night to you and hope another year you’ll join our Lammas Fair.