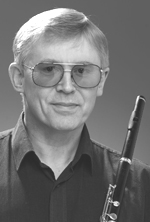 Whilst at school, Ian learned the flute, viola and piano. He then went on to the Royal Manchester (now the Royal Northern) College of Music, taking flute with David Butt (with whom he later studied in London) and piano with Anthony Goldstone. There were subsequent advanced flute sessions with Andreas Blau in Berlin. After graduation, Ian began teaching woodwind instruments for East Yorkshire County, later becoming Head of Woodwind for the instrumental service, and also at Hull University. He now spends his time equally between performing, advanced teaching, examining and writing.

Many of his students (not only flautists) have enjoyed success in national competitions and have pursued professional careers in both performance and teaching. In addition to his wide experience directing youth orchestras, he was also musical director of the Cleveland Philharmonic Orchestra; an active free-lance flautist, he is Principal in the Hull Philharmonic the East Riding Sinfonia and the Cleveland Chamber Orchestra. He is a founder-member of many chamber groups, some of which have broadcast on BBC Radio. He has appeared as a soloist at London’s Wigmore Hall with the pianist Su Lloyd, and has given many recitals with pianists such as Anthony Hedges (with whom he has a regular duo-partnership) and Eric Parkin, in addition to numerous concerto appearances. He has played with the Royal Liverpool Philharmonic Orchestra and has appeared as a soloist with the Allegri Quartet.

Ian works regularly for the Associated Board as an examiner for both grades and diplomas; in addition to regular visits to the Republic of Ireland, his duties have taken him as far afield as Hong Kong, Singapore, Malaysia, New Zealand and India. He is also a member of the panel of mentors for the CT ABRSM course and an editor for the Publishing Company. The Board has published his Woodwind Scales and Arpeggios Series (together with the companion manuals for Brass, which he edited with John Wallace) and chose him to give its first-ever national workshop for flute teachers in 1996, at the Royal Academy of Music. He has also given numerous teacher seminars on behalf of the Board and has been heavily involved with the development of Music Medals, the Board’s new assessment for group-taught candidates, which got under way in September 2004 in the UK.

The Board has also published his ten-volume anthology in the Time Pieces series, for flute, oboe, clarinet and saxophone, with the final volumes for bassoon to follow later in 2006. He is considered an authority on the music of Engelbert Humperdinck (the real one), preparing a new article on Humperdinck for the latest edition of the New Grove Dictionary of Music and Musicians. The culmination of many years’ teaching experience was marked in September 2003 by the publication by Oxford University Press of Flute Time, a two-part tutor; two companion books of repertoire Flute Time Pieces have recently been published. A further book of ensemble pieces is planned.